This week's episode of Dexter was very good.
The pacing was incredible, and the build up to the last line in the last shot was perfect.
The fact that the title of the episode was also the last line spoken was a nice touch.
This season has been hit and miss and kind of flat at times so this episode might just seem great by relative comparison, but it was pretty darn good.

p.s, I watched "The Love Guru" this weekend and liked it, so take my opinions with a grain of salt.

Here are 4 clips from our studio sessions for "Slime" the title song from Greg Lamberson's Slime City Massacre movie.

Clip 1- This is me doing some takes of what will eventually become the guitar solo section.
http://www.youtube.com/watch?v=G1uAayZNp3s&eurl=http%3A%2F%2Fwww%2Eyoutube%2Ecom%2Fuser%2Fmarcyitaliano&feature=player_profilepage#t=102

Clip 2- Marcy , Ron and myself singing "Slime" for the chorus. We eventually doubled this and added another voice as well.
http://www.youtube.com/watch?v=GFdUNqABVEE&eurl=http%3A%2F%2Fwww%2Eyoutube%2Ecom%2Fuser%2Fmarcyitaliano&feature=player_profilepage

Clip 4- Brett adding his vocal talents to the chorus.
http://www.youtube.com/watch?v=GovMMiVvSK8&eurl=http%3A%2F%2Fwww%2Eyoutube%2Ecom%2Fuser%2Fmarcyitaliano&feature=player_profilepage

Below is a picture of my new tattoo.

It was conceived 2 years ago as a way for Marcy and I to commemorate our experience during hurricane Katrina.

We added our babies initials, and now it means even more. 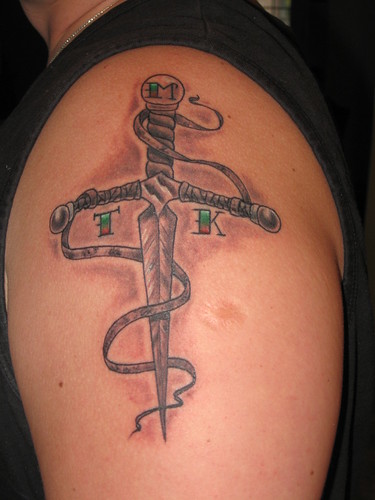 We were in Ron Roy's Threshold Sound Studios today for session 1 of the recording of the theme song to Greg Lamberson's Slime City Massacre.
All the guitars and bass were recorded and Marcy wrote all the lyrics while I recorded the guitars. I did a practice run at vocals with the fresh lyrics before we left. We decided on the way home that the verse melodies and vocal delivery need to be drastically changed. It's sounding too much like a couple of the Johnny Gruesome songs, so tonight when the kids go to bed we will be trying to tweak it.

The guitars sound heavy and wonderful though.

Back to the studio on Thursday.

I last posted at the end of January when the contractor was about to start finishing our basement.Since then lots has been happening. I will be short and sweet, as I only have a few minutes.

The Wife:
Marcy broke her arm (near the elbow) on my birthday April 4th. She was unable to lift the kids for 6-8 weeks. She fully recovered but then had Thyroid surgery on July 15th and isn't allowed to lift the kids for 2 weeks. So it has been pretty busy around here for me keeping the kids busy. We will get through this and August should be great!!

The Kids:
The kids are 13.5 months old are are walking and talking ( about 20 words each) and being playful and sometimes sneaky, but usually a crap load of fun. ( Pun intended). I love hanging out with them and the time seems to fly by , except on the rare occasion they get up too early and I drag my ass all day.

Work:
I got new teacher qualifications in the winter ( Spec Ed Specialist) and in the fall I get a a pretty substantial raise ( although I lose half of it to taxes). I still work with at risk teenagers and will do that for at least 1 more year. I'm off until September 3rd.

Music/Art:
I am working on the title song for Greg Lamberson's new Slime City Massacre movie. I have re-written the music 2 times and have an outline for lyrics but nothing concrete yet. I will be asking Marcy to help me soon as I'm booked into the studio to record it in 1 week.
I play a songwriting contest in Hamilton ( Stoney Creek) at the Old Powerhouse Pub this Wednesday night. I play at 10:20 (ish). Marcy and I are planning on writing a short story together before September. Marcy finally published her Katrina book ans has ideas for a new fiction novel.

Television/Movies/Books:
We have gotten really into "True Blood" from HBO. I thing I'm going to talk like Vampire Bill for the rest of the summer just for fun. We just finished watching the third (shortened) season of "Torchwood" and it might have been the best television I have watched.....ever. I hated the Friday the 13th remake. If anyone wants my Blu-ray copy of it just let me know. I am reading "World war Z" and I didn't like it at first, but now that I am over 2 thirds into it, is really fascinating reading.

That's all for now.

The electrician and plumber are coming on February 7th

We will be getting my brother-in-law to help with the flooring.

We found out today the government will be giving us $1400 back on our 2009 taxes for doing renovations this year during a recession.

The whole thing should be finished by April, but maybe sooner.

Would you like to come over for a drink in our new cool rec-room, entertainment centre, music studio, pub-like basement?

I know you do.

This will be a great year.

I helped make 2 babies. And they are doing great.
I finished a new CD ( yet to be promoted though).
My career is on the right path.
I love my wife and she loves me.

I don't make resolutions.I am constantly trying to be better and do better.

ps. Dexter season 2 is amazing so far.
ps.ps. The new Indiana Jones is not as good on the second viewing at home on DVD as it was in the theater.

Yesterday was my wife Marcy's birthday. She is now 35 years old. I met her when I was 17 and she was 16. We have been together for over 18 years. We have been married for over 13 years.

We have been through everything together.

We now have two wonderful twin 6 month old boys together.

I would be typing for a week straight if I listed every cool thing we have ever done.

p.s. when she walks into the room the smile on my boys faces is the most amazing thing to watch. The are mamma's boys in every way.
p.s.p.s....I was looking an old picture from her senior high school year book. Ubder her picture it says "C.C. # 1". It made me smile.

I can't get myself to write anything in my LJ.

There I just did I guess.

Wow, It's been while.

Here's the thing. My computer is way down in the basement, and Marcy needs hers for work, and most of my time has been spent watching one or both of the kids.

We have starting putting the kids in their cribs around 10PM and trying get a couple hours of "adult" time before going to bed. Some nights it works, some nights it doesn't. The kids are too young to let "cry it out" so it all depends on how they are doing. Tonight they are asleep and quiet as of 11:00PM.

Being a dad has been great so far. I am tired but things seem to be evening out already as they are starting to sleep longer at night, especially Thomas who sometime will go fro 11-5am in one stretch.
It has been a joy watching them grow and smile and become more alert in such a short time.

My personal goal this month is to start rehearsing songs from my new CD and get back into "shape" for performing again. My last gig was before Christmas and I have hardly picked up a guitar since the kids have been born.

I am going to sit for an hour and watch my big screen TV and have a glass of wine, while things are quiet.